It has been a while! I have had some summer vacation and other stuff have been going on so I haven't had that much time to create new things. I have a lot going on that I want to throw up here and I hope I can do so during the autumn. I have been thinking a lot about what Mel's counterpart should be, and I finally think I've got it. I have some sketches and I hope I can model the little creature as soon as possible. I also have to make some adjustments on the hand so that me and Kian Bashiri finally can make our game where you roll your thumbs (spoiler ;) )! We have ideas for other "sports" featuring hands as well :)

What I really wanted to talk about was that I haven't only been chillin' during this summer vacation. Me and Kian and lots and lots of other cool nerds met up at the fantastic game jam No More Sweden in July to make games! We had lots of fun and me and Kian managed to create something quite cool. So cool in fact that we "won" the game jam!! :)

Here you can play our experimental game BJERN!! 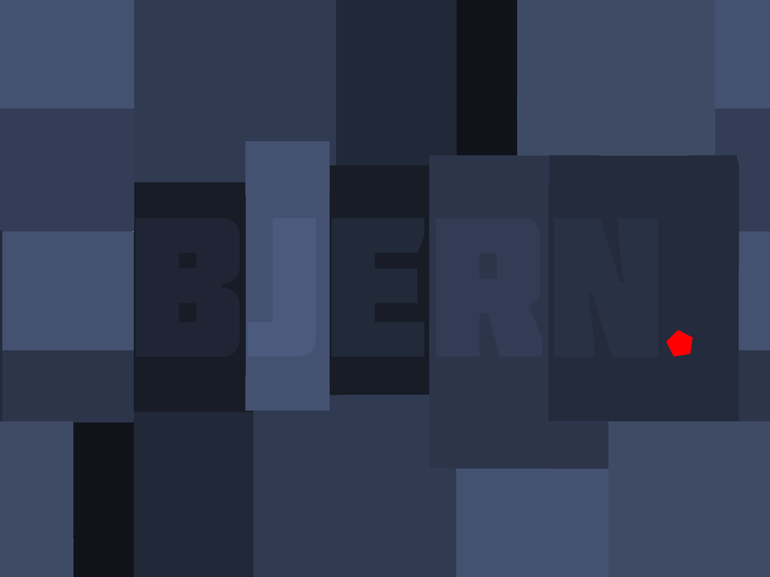 Thanks to all you guys who organized and participated, and thanks for all your votes!! We had so much fun. Hope we'll see you all next year!
Upplagd av Maria "Nork" Norkvist kl. 12:49 Inga kommentarer:

Remember last time when I told you I was working on something else? Well, this is it!! I have been modeling, rigging and skinning a hand. The hand is for a small game I am also creating with Kian Bashiri. I can tell you more of the actual game play at another time ;) 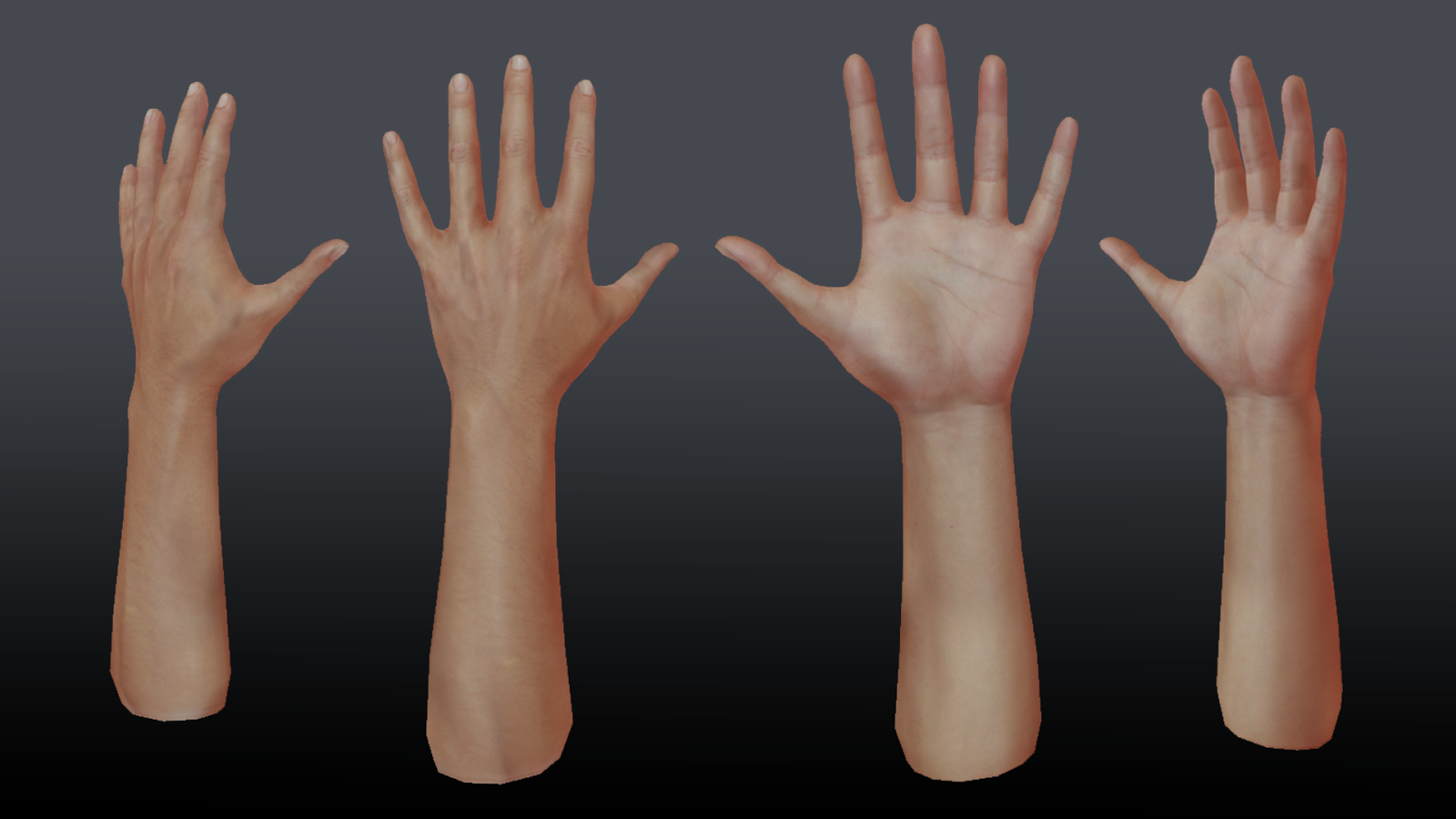 The initial model was made in 3ds Max. I then exported my mesh into Zbrush to make a high poly model. I had a lot of fun working with this hand, making all the small details and trying out the spotlight tool to create a cool diffuse. It is very much a work in progress at the moment as I need to tweak the shading a bit and work more on my textures. The model is as I mentioned rigged and skinned. I can show you some posing of the hand later!

Just a small update ;) Have a nice night!

It has been a while. More than a year. I have been very busy making games and haven't had the time to update the blog because of that. I am hoping I can change the pattern and start updating more often again. I am currently working on a few personal projects with the brilliant programmer Kian Bashiri and I'll try to update the blog as often as I can.

I have updated my portfolio with what I have been doing at work for the last year, please check it out ;)

I have two personal projects that I am working on at the moment. Below is a picture of the character Mel from one of the projects. Mel is a melee / explosions type of character that will be one of two characters in a hack and slash game. I have rigged, skinned and made a few simple animations with Mel, but nothing that I can show you yet. Maybe in a few weeks ;) 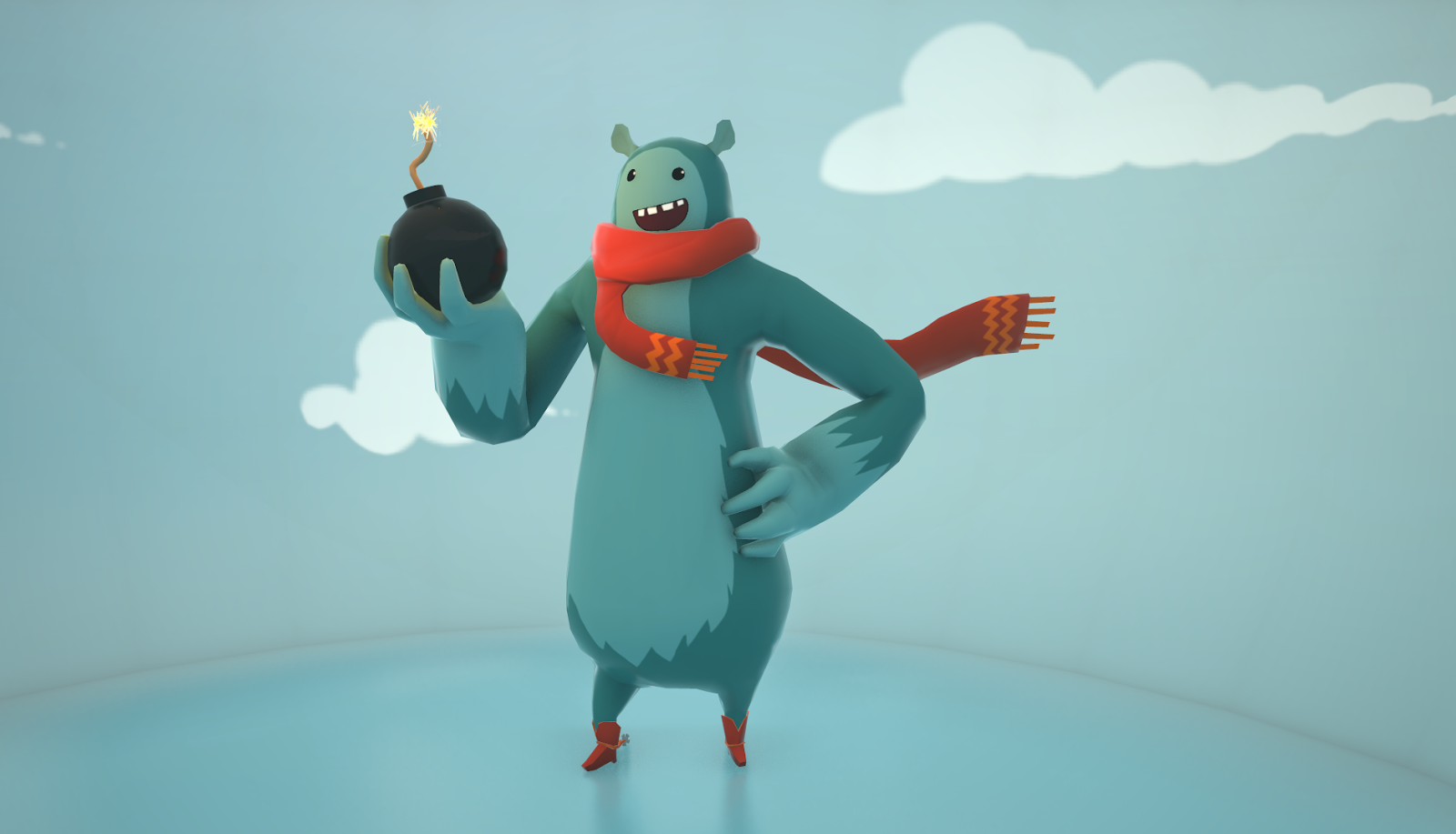 If you have any feedback, please tell me! It's easy to miss things when you're in it ;)

As I mentioned I am working on two projects simultaneously. As of now there is not much I can show you. But I'll be sure to update you as soon as possible. Perhaps next week!!

I hope you enjoyed Mel! Have a great evening!

After many hours and working nights after work, it is finally done!

Here are some renders. There is still some optimization that needs to be done, but otherwise I consider myself finished with this piece at the moment. I will update my webpage and portfolio with this new stuff as soon as possible. 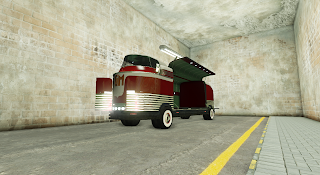 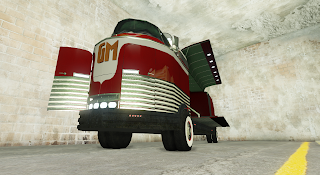 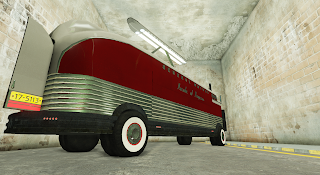 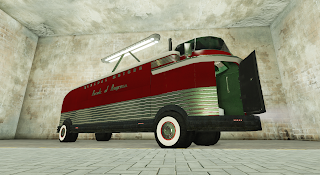 It has been a while since I updated you on my progress. A lot of shit, both good and bad has been going on in my life and I have had other things on my mind. I had to move back home to my parents in Stockholm, and at the same time do a work test for DICE.

That, amongst other things has delayed my work on the bus. Recently I picked up the bus again and started working on it. I am now in the last stages of the progress. I thought I should update you on what it looks like at the moment. I have laid down flat colours on the outside as well as the tires of the bus. What is left is polishing the textures, both the outside and the inside, fixing the various material settings of the windows and the finish of the hull of the bus. The final thing to do is the staging, fixing a cool but simple setting for the bus to be placed in. 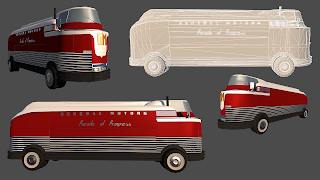 In the beginning of this project I had an idea of staging the car in a developed environment. I will put that idea on hold, and instead work with a smaller project. I will tell you more on that later!

Have a good rest of the weekend, and I will try to update you sooner next time!

Since last time a lot has happened! I finished the outside of the boat hangar and it is now on display on my new website :D. You can all check it out at http://marianorkvist.com/

Since Monday I have started with a new project. This time around I wanted to make a vehicle. Already in the spring of 2012 I found out about the awesome GM Futurliner, and now I am actually going to make it in 3D. The GM Futurliner was a display vehicle developed by General Motors in the forties. A total of 12 vehicles were produced. They were used in General Motors campain "Parade of Progress", where they displayed the cars and technology of the future. The parade ran in the UD between 1940-1941 and 1953 to 1956. Of the twelve, nine are still known to exist, and car number eight, the only one of the vehicles outside of the US, is actually located here in Sweden. 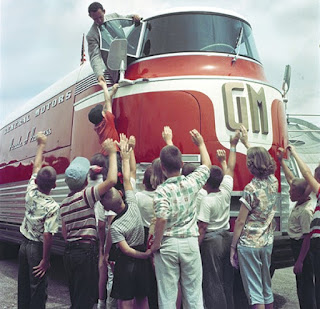 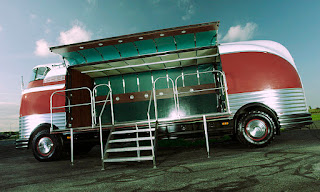 You should all check out this bus as it is super cool! I, for one was perplexed by the awesomeness of it. I started modeling yesterday and have been modelling for about 6-8 hours. I am quite finished with the outside, there are a few details left. Tomorrow I will make the insides of the bus, I think it will be loads of fun. 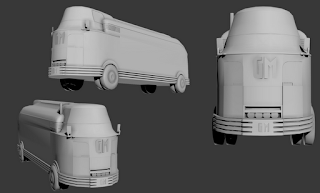 My idea for this project is to create the vehicle, shiny new and beautiful, as well as a scene were the car is placed in an interesting environment. The vehicle in the scene will be a wreck compared to the new shiny version.

It's Thursday, and today I am going to Stockholm to visit my family over the weekend. It's going to be great! As you know I have been working on a boat hangar with my friend Aydin. It is nearing completion, on the outside, at least. When the outside is done, I will take a break from this project and do something else for a while, just to get a new perspective and try out something else.

These are two snapshots of what the outside looks like at the moment. There are some finishing touches that has to be done. I will work a bit more on the material on the main building, add a ton of cool decals and collision boxes for all the meshes. 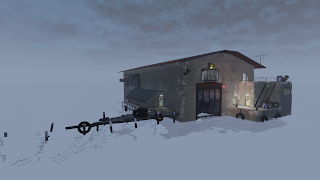 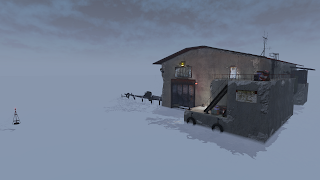 Below are the four different barrels that can be seen in the scene. I made two standard barrels and then imported them to Zbrush and made two different smashed variations.

Now I will be going for lunch. Have a great day!!
Upplagd av Maria "Nork" Norkvist kl. 03:52 Inga kommentarer:

Maria "Nork" Norkvist
Hi, my name is Maria Norkvist and I am currently working as a game artist at the company Zoink in Gothenbrug, Sweden. I'll try to use this blog to keep you updated on what I'm working on! Check out my portfolio at http://www.marianorkvist.com/ See ya'll!!